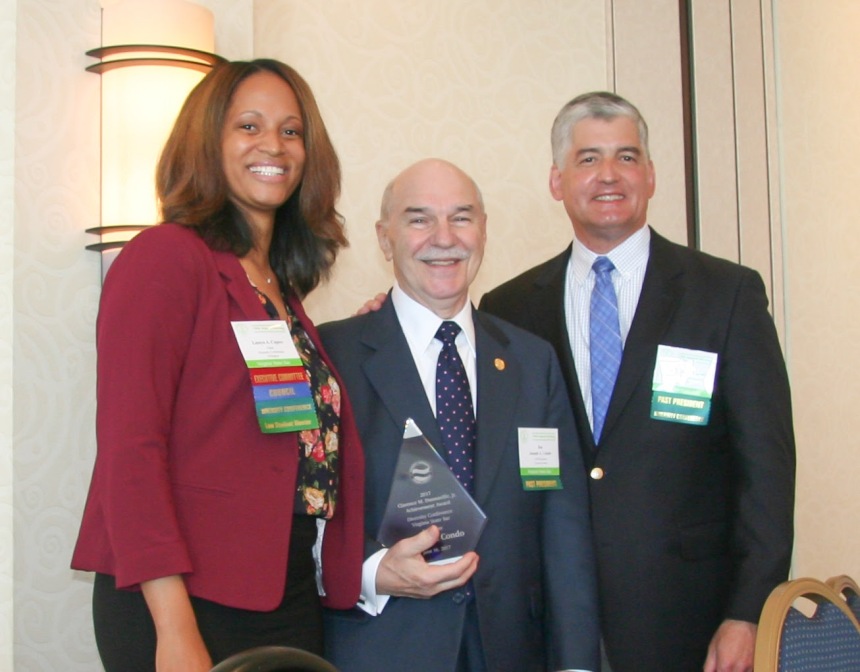 Joseph A. Condo received the Clarence M. Dunnaville Jr. Achievement Award for 2017 at the June Annual Meeting,  Condo was honored for exemplifying the Diversity Conference’s mission of fostering, encouraging, and facilitating diversity and inclusion in the bar, the judiciary, and the legal profession.

Latoya Asia Capers, chair of the Diversity Conference, noted that Condo has long been   a champion for diversity and inclusion in the legal profession in Virginia. His nominator noted that, “[a]s president of the Virginia State Bar in 2000-01, Joe prioritized diversity and created the Millennium Diversity Initiative, which in turn created an impetus and funding for the Oliver Hill/Samuel Tucker Summer Law Institute and other diversity-focused projects, including the Diversity Conference. For over 20 years, he has been at the forefront of promoting diversity and inclusion on both the state and local level, paving the way for so many to carry on that noble goal.  He continues to be a vibrant force for inclusion and is a leader and mentor for an entire generation within Virginia’s legal profession.”

In addition to serving as president of the Fairfax Bar Association (1985-86) and the VSB (2000-01), Condo served for twenty-one years on the Council of the VSB, and as a delegate to the American Bar Association  House of Delegates for six years.  Condo has chaired numerous sections, committees, and special task forces, including the family law sections of the Fairfax Bar Association and the VSB, and the VSB’s Bench-Bar Relations, Professionalism, and Judicial Candidate Evaluation committees.  He is a fellow of the American College of Trial Lawyers, the Virginia Law Foundation, and the American Bar Foundation. Condo, who  is a principal of  and a family law attorney at Offit Kurman, was also honored to be named the 2017 recipient of the Virginia State Bar’s Betty A. Thompson Lifetime Achievement Award at the June  Annual Meeting.

Speaking at his installation as president of the VSB in June 2000, Condo said, “People of color will soon comprise over fifty percent of our nation’s population; yet our profession is over ninety percent white. We need to expand access to the profession, so it is more reflective of the diverse society we serve.”